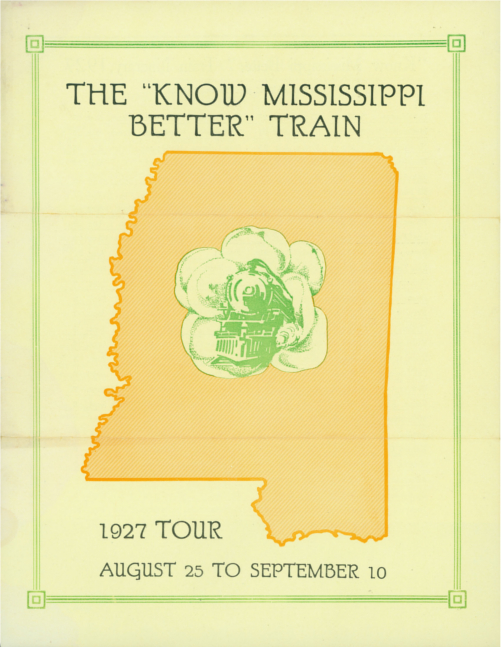 Prior to 1924, the laws in Mississippi discouraged the movement of new people and industries into the state. Though many of those laws were abolished, and more encouraging laws instated in 1924, Mississippi's reputation still had to be enhanced before progress could occur.

The Know Mississippi Better Train was born from the desire to encourage the growth of Mississippi. Led by then lieutenant governor Dennis Murphree, citizens representing twenty-six counties met in Jackson in May 1925, and agreed to charter a special train to travel throughout the United States (and sometimes Canada and Mexico). The first such train left the station in the summer of 1925, and except for four years during World War II, ran every summer until 1948.

The annual trip lasted ten to fourteen days. Carrying promotional literature, exhibits, and souvenirs, each Know Mississippi Better Train also transported 150 to 200 prominent Mississippians who were ready, willing, and able to speak well of the resources and opportunities available in the state. The Board of Supervisors of each of Mississippi's 82 counties chose two citizens to make the trip. Everywhere the train stopped, it was met by crowds of hundreds (or even thousands) of people eager to welcome the visitors and see what Mississippi had to offer. Every mayor and governor on the route was presented with a fine Mississippi-grown watermelon.

In 1927, the trip ran from August 25 to September 10. In addition to the exhibit cars, there were eight Pullman cars and two dining cars. Three chaplains were assigned to the train, and a 25-piece band from the State Teachers College in Hattiesburg provided entertainment all along the route. The cost of the entire trip was $210.00 per person.

For more information about this item or Special Collections, call 601.266.4345 or Ask-a-Librarian. To see more Items of the Month, click here.

For more information about the Know Mississippi Better Train:

Diamond, Rose. The Story of the "Know Mississippi Better" Train.

NOTE: The brochure pictured above is from the Margaret Thatch Hinton Collection held at McCain Library & Archives, University of Southern Mississippi. Margaret Thatch traveled on the Know Mississippi Better Train and played the French horn as part of the State Teachers College Band in 1927 and 1928. She graduated in 1929 from The University of Southern Mississippi (then State Teachers College). In 1956 she received a master's degree from USM (then Mississippi Southern College), and went on to teach in the Petal (Mississippi) Public School District for a number of years.

Text for this "Item of the Month" prepared by Diane DeCesare Ross.