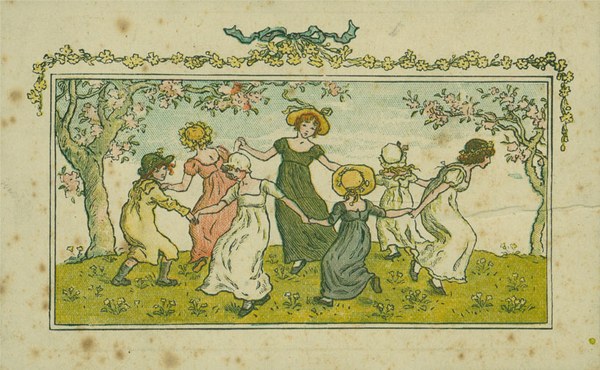 Pictured here are illustrations from the Almanack for 1883 found in the de Grummond Children's Literature Collection's Kate Greenaway papers. Greenaway, along with Walter Crane and Randolph Caldecott, was a part of the triumvirate of early British illustrators for children's books. Greenaway's career began in the greeting card business in England. Although she had proven to have some marketability, it was not until her father introduced her to the engraver, Edmund Evans, that Greenaway's commercial success began.

Greenaway burst upon the popular scene in England and America with the publication of Under the Window, a book written and illustrated by Greenaway, designed and printed by Edmund Evans, and published by Routledge in 1879. That one publication marked the beginning of Greenaway's significant popularity.

The partnership between Greenaway and Edmund Evans continued with the publication of the almanacs. Annual volumes of the almanacs appeared from 1882-1894, all printed by Edmund Evans and published by Routledge. Much of Greenaway's success can be credited to Evans' ability to transfer Greenaway's illustrations into an accurate reproduction, with the result cementing both of their reputations in the art world.

Greenaway's style appealed to the masses, and her popularity spawned piracies and imitations of her work. The imitations became so widespread, especially in the United States, that they provided an insurmountable competition for the artist. By the late 1890s, Greenaway realized that her place in the art world was no longer guaranteed. She gave up children's book illustration, instead turning to oil portraiture and landscape watercolors. Neither of these ventures was successful, and she became increasingly bitter and reclusive. She was diagnosed with breast cancer in November 1899. By that time, the cancer had spread and she died on November 6, 1901 at age fifty-five.

For more information about this item contact Ellen Ruffin at or 601.266.6543. To see more Items of the Month, click here.

Lundin, Anne. The Critical Reception of Kate Greenaway in England and American, 1879-1901. Diss. The University of Alabama, 1992.

Text for this Item of the Month prepared by Ellen Ruffin, Curator of the de Grummond Children's Literature Collection