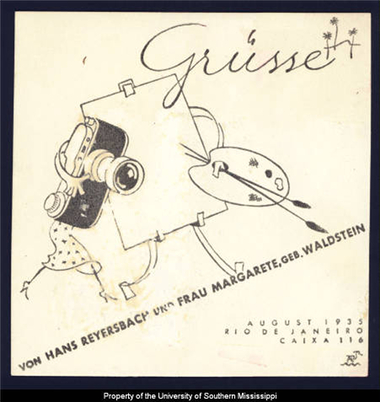 In an autobiographical sketch written by H.A. Rey, he refers to Margret’s arrival in Brazil as “Turning Point, 1935.” Within three short months, H. A. had become reacquainted with Margret, married her, changed careers, and embarked on a lifetime adventure.

Prior to Margret’s arrival, H. A. had been living in Brazil for twelve years working in commerce, selling bathtubs up and down the Amazon. Margret, having studied at the Bauhaus Art School and having worked in advertizing agencies in Germany and England, had grown increasingly weary of Hitler’s Germany. She had decided to leave her homeland to work as a photographer in Brazil. She looked up H. A. Rey, an old family friend, because she knew of his passion for art, a passion Margret shared. She persuaded H. A. to leave his steady income and join her in a career of advertising—magazine and book illustrating. Margret liked to call their partnership a “two man advertising agency, doing a little of everything: wedding photos, posters, newspaper articles, and whole advertising campaigns."

Pictured here is the wedding announcement H. A. and Margret Rey sent to their family and friends in 1935. In 1936, they decided to take a belated honeymoon trip to Paris, which is where Curious George originated. Though the Reys had no children of their own, they would often say that Curious George was like a child to them—the kind of child that takes care of his parents.

The H.A. & Margret Rey Papers at the de Grummond Children’s Literature Collection contain creative works, printed material, correspondence, journals, financial and legal documentation, photographic material, video and audio recordings, and artifacts created and accumulated by H.A. & Margret Rey, Lay Lee Ong, and the staff of the de Grummond Children's Literature Collection between around 1906 and 2002. H.A. & Margret Rey's papers were created from their composition of published and unpublished literary works, the merchandising of literary characters created by them, their production of advertising art and other ventures unrelated to their literary work, and the conduct of their personal affairs. The de Grummond Children's Literature Collection also has accumulated a sizeable body of records related to the acquisition, organization, exhibition, and management of the H.A. & Margret Rey Papers. The clear majority of the Rey Papers are in English, but significant quantities of material appear in German, Portuguese, and French. Smaller numbers of records are written in Spanish, Italian, Japanese, Danish, Russian, and Latin.

If you have questions about the Reys or the de Grummond Children’s Literature Collection, contact Ellen Ruffin at  or 601.266.6543. To see more Items of the Month, click here.

For more information on H. A. and Margret Rey: