The Marble Faun by William Faulkner 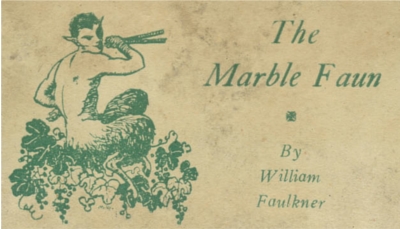 Nobel-prize winning author William Faulkner (1897-1962) began his writing career as a poet. Faulkner published in 1924 his first book of poetry, The Marble Faun, with the assistance of his friend Phil Stone, who paid Edmund R. Brown of The Four Seas Company four hundred dollars for a run of 500 copies. The book, which Brown referred to as, “…not really a very good book of poetry,” did not sell very well and most were remaindered by the publisher. A number of copies were lost in a fire in Phil Stone’s attic. These are some of the general, if vague, facts on the ground regarding the publication and distribution of the first book of one of our finest writers. The story of The Marble Faun is less about the quality of its content, a poetry cycle considered rather immature and dealing with fairies and nymphs and the like, and more about how difficult it has become to locate an original copy.

According to William Boozer, author of William Faulkner’s First Book: The Marble Faun Fifty Years Later, the precise numbers of copies produced, sold, remaindered, and burned vary according to different sources. Faulkner’s brother claimed that out of 1000 produced about 950 were lost in a fire at Phil Stone’s house, while Faulkner scholar James B. Meriwether recalls Phil Stone mentioning that 500 were printed and only some twenty copies burned. Mr. Brown of Four Seas remembers the print total as 500. Out of the presumed 500 printed, most speculate that only about 100 copies are extant. Mr. Boozer attempted an inventory at the time (1974) and located fifty-six copies, with twenty-six of those housed in libraries.

Boozer’s investigation did not include the McCain Library copy, interestingly, which leads one to wonder how many more may crop up if a new inventory were done today. The McCain Library copy, stamped, “From the Library of Theodore G. Bilbo, 1961,” belonged to that controversial political figure and was part of a larger donation in 1961 from the family. Theodore G. Bilbo (1905-1947) served Mississippi twice as governor and two terms in the U.S. Senate. When Mr. Bilbo obtained his copy of The Marble Faun is unclear. There is no dust jacket and the binding is quite fragile. Patrons interested in reading Faulkner’s pastoral poetry may check out the facsimile copy in Cook Library (PS 3511 .A86 M3 1924) or with his additional work, The Green Bough, in a 1965 reprint (PS 3511 .A86 M3 1965). The 1924 original is available for viewing by special request.

For more information on The Marble Faun:

To request a look at the original, please contact Jennifer Brannock at or 601.266.4347. To see more Items of the Month, click here.

Text for this "Item of the Month" prepared by Peggy Price.