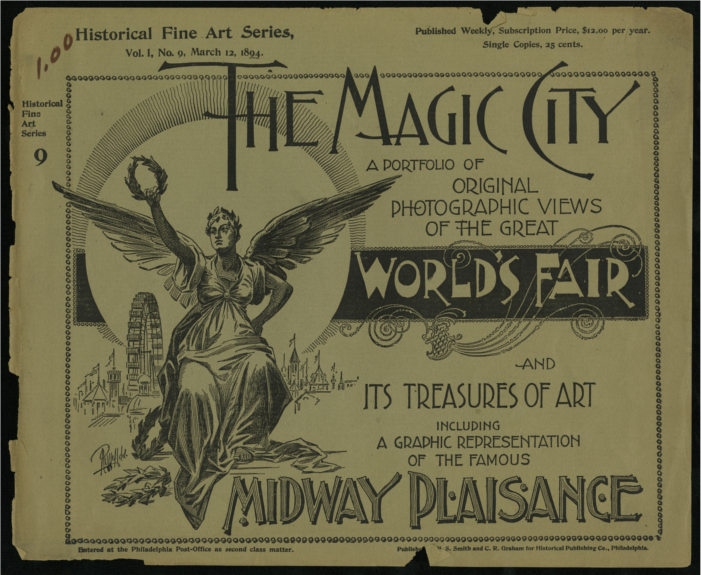 "The object is to present the World's Fair, the Midway Plaisance, the splendid buildings, the rich, varied and wonderful exhibits, and the great crowds of visitors from all the nations of the world just as they appeared during the memorable summer of 1893."

"In some respects this splendid portfolio is better and more to be desired than an actual visit to the Exposition, for through the magic agency of photography the scenes are transferred in marvelous beauty and permanent form to the printed pages, while the accompanying historical descriptions make plain and clear myriads of intricate and wonderful things, many of which were not comprehended by those who saw them."

-The Magic City "Plan of Publication"

The Magic City portfolio documented in photographs and descriptive text the 1893 Chicago World's Fair. Issued in a series of eighteen numbers over eighteen weeks, together they comprised a volume of three hundred photographs of the structures, people, works of art, and other features of the Fair. Issue number nine offers "Persian Swordsmen in a Mock Duel," "Performance in the Javanese Theatre," "The Norway Building," "Exhibits of the Relics of the Cliff Dwellers," and "Manufacturer's Building and Wooded Island," for example. A particularly dramatic photo sadly describes a fire at a storage building where sixteen men lost their lives. The entire run was collected and bound and produced as the book The Magic City: a Massive Portfolio of Original Photographic Views of the Great World's Fair, by J.W. Buel. Buel wrote the effusive and at times hyperbolic descriptions underneath each image. The photographs are not credited.

According to Peter Bacon Hales' introduction to Spectacle in the White City: the Chicago 1893 World's Fair (2009), architectural photographer Charles Dudley Arnold was the official photographer of the Fair. Arnold documented the entire construction process and kept a tight control over access to the images and views of the Fair that were available as both early marketing pieces for journalists and later as souvenirs for visitors. Since the photographs of The Magic City are not credited, without an in-depth investigation one might assume they are products of Arnold's work or perhaps of William Henry Jackson, a photographer hired later to capture images for a "Final Views" portfolio. Hales tells us that such fine-quality portfolios were available for sale at the Fair in segments that visitors could assemble and have bound together. "More commonly, though, the portfolios' were made in halftone reproduction, a relatively new process that enabled inexpensive, high-speed printing of images that, while markedly inferior in quality, were also far more affordable. It was in this guise that many who did not see the Fair in person, learned of its wonders. Traveling salesmen by the thousands fanned out over the continent selling these sets, often by subscription,' meaning that one received a set of pictures with texts on a monthly basis, and was billed accordingly."

Though the fair, also known as The World's Columbian Exposition, did not open until May 1, 1893, the enormous undertaking was meant to commemorate the 400th anniversary of the discovery of America by Christopher Columbus. Spectacular fairs like the Columbian Exposition were an opportunity for leaders in architecture, technology, engineering, art and design to showcase their talents and impress visitors from all over the world. Part of the wonder and appeal of these expositions was that they were temporary creations meant to dazzle only for a short while. The 1893 Fair, which cost about twenty-eight million dollars and featured fourteen great buildings with two hundred additional buildings, was only open six months. Photographs available through portfolios like The Magic City were more than keepsakes, for they captured for posterity the grand scope of the transformed urban landscape and provided a visual record of the magnificent achievement long after the structures were dismantled and cleared away.

For more information about The Magic City or Special Collections, call 601.266.4345 or Ask-a-Librarian. To see more Items of the Month, click here.

Text for this "Item of the Month" prepared by Peggy Price.