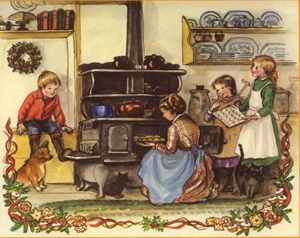 The de Grummond Children’s Literature Collection at The University of Southern Mississippi will feature 130 original works of art by award winning illustrator, Tasha Tudor, at an exhibit from October through December at Oddfellows Gallery in downtown Hattiesburg. These pieces are part of a traveling exhibit organized by Norman Rockwell Museum, Stockbridge, Massachusetts.

The exhibit, entitled Tasha Tudor: Around the Year, commemorates 100 years of Tasha Tudor and will include original paintings, books, cards and calendars, studies, manuscripts, doll cards and letters, and ephemera, artifacts including hand-painted goose eggs and hand-decorated floral box. The exhibit illuminates the changing seasons and special celebrations with outstanding, rarely seen examples of this beloved author and illustrator’s original art for children’s books and greeting cards highlighting the holidays, including Christmas, a favorite of Tudor’s.

“Rarely do we have a world class exhibit, such as Tasha Tudor: Around the Year, come to Hattiesburg. Through the generosity of the C.E. and S. Foundation and the Norman Rockwell Museum, we are able to recognize the centenary of one of America’s most significant illustrators. Those who view the exhibit will have an opportunity to purchase one of a kind Christmas cards as well as books and prints. We look forward to celebrating the work of Tasha Tudor,” said Ellen Ruffin, de Grummond Curator.

The de Grummond Collection has events scheduled throughout the exhibition that include a symposium in October, a luncheon in November, and a tea in conjunction with the Victorian Candlelight Christmas in downtown Hattiesburg. Notable Tasha Tudor scholars, Jeanette Chandler Knazek and John Hare, will be featured presenters at the October symposium as well as Marjorie Tudor, Tasha Tudor’s daughter-in-law.

Knazek has enjoyed Tasha Tudor’s writings and illustrations for over 50 years and has been a consultant for Tasha Tudor exhibitions organized by major museums in the United States and the United Kingdom. The author of many published articles about Tudor's artistry and life, Knazek also co-curated the traveling exhibit.

John Hare, creator of the Tasha Tudor Bibliography Collection, has spent 25 years assembling books, illustrations, photographs and manuscripts that encompass Tudor’s contribution to the genre of children’s literature. The collection now contains more than 1,500 books and 1,500 other items exhibiting Tudor’s art and writings.

Tasha Tudor (August 28, 1915-June 18, 2008) is one of America’s best-known and beloved illustrators. Her first little story, Pumpkin Moonshine, was published in 1938. She illustrated nearly one hundred books, the last being the 2003 release, The Corgiville Christmas.  She received many awards and honors, including Caldecott Honors for Mother Goose and 1 is One. Many of her books are printed in foreign languages and distributed around the world.  She also created thousand of Christmas cards, Advent calendars, valentines, posters, and other works throughout her 70-year career.

To view the event schedule and to register for the events, click here.