Weep No More, My Lady: A Southerner Answers Mrs. Roosevelt's Report on the "Poor and Unhappy" South (1950)

As the first lady of the United States of America, Eleanor Roosevelt wanted to stay in contact with citizens around the country. From 1936-1962, she wrote a syndicated newspaper column about her travels around the country, national events, and social issues. Her February 4, 1950, column discussed her travels in North Carolina. In the article, she discusses her family history (she had relatives in Georgia), labor issues, and general conditions in the South. Roosevelt writes

There is a charm about the South. The smell of magnolias, the lavender-and-old-lace feeling, still exists there. People are less hurried; they have more opportunity perhaps for the grace of living. But underneath it all I am not so sure that there are not some signs of poverty and unhappiness that will gradually have to disappear if that part of our nation is going to prosper and keep pace with the rest of it. 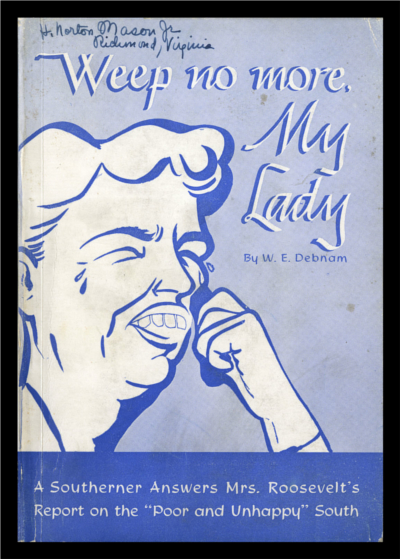 After this paragraph, she discusses her familial lineage in Georgia and labor issues in Michigan. In response to the statement about poverty and unhappiness in the South, North Carolina radio commentator, Wildemar Eros (W. E.) Debnam took to the airwaves denouncing Roosevelt's opinions of the South. He expanded his opinions by writing and publishing the pamphlet Weep No More, My Lady: A Southerner Answers Mrs. Roosevelt's Report on the "Poor and Unhappy" South.

In Weep No More, Debnam spends the majority of the book debating how the Civil War and Reconstruction devastated the once prosperous South. But all of this wealth or most of it was gone with the wind when Lee surrendered. The remainder of the pamphlet focuses on forced integration, corrupt politicians, and northern dominance as elements of the downfall of southern states.

This pamphlet which was published in 1950 went on to sell over 200,000 copies. The paperback version sold for $0.50 with a $0.10 shipping and handling and could be ordered by mailing the money to the author's home in Raleigh, North Carolina.

To view this item, visit the 3rd floor of McCain Library. Weep No More, My Lady: A Southerner Answers Mrs. Roosevelt's Report on the "Poor and Unhappy" South can be found at SpColl F215 .D32. For more information on this item, e-mail or call 601.266.4347. To see more Items of the Month, click here.